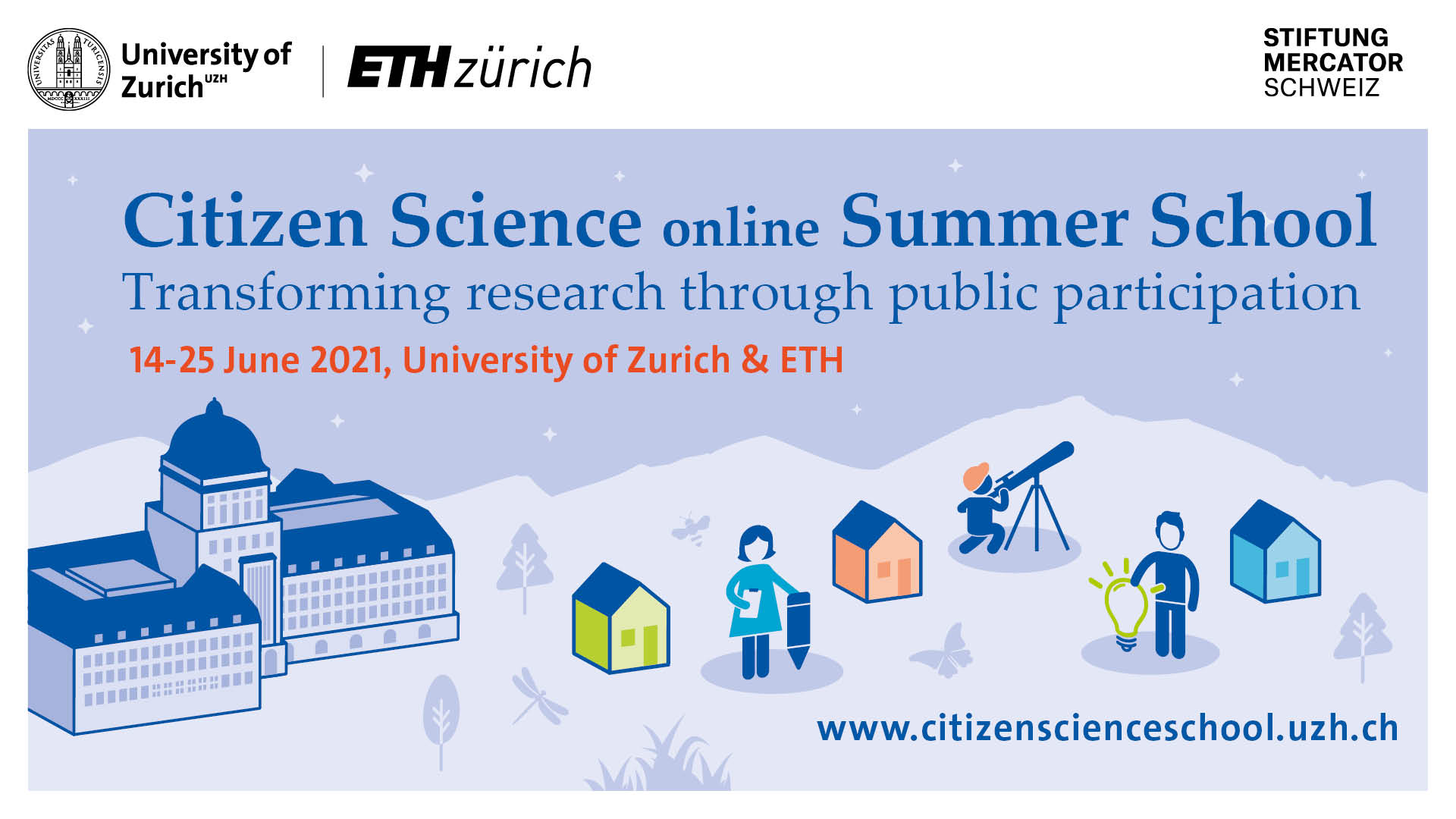 From 14-25 June, 2021, 31 PhD students, postdocs and practitioners from 12 disciplines and eight different countries participated in the virtual Citizen Science Summer School. The Summer School was organized by the Participatory Science Academy and the Graduate Campus of UZH. Participants completed a dense program packed with lectures, workshops, showcases of local Citizen Science projects and social activities. The goal of the school was to equip participants with knowledge on citizen science approaches, concrete tools and methods, and insights into different perspectives on Citizen Science and practical experiences.

In light of the ongoing pandemic and the insecurities around travelling, the organizing team decided – with a heavy heart – to hold the School virtually and to stretch it over two weeks instead of one; keeping each day shorter than it would have been had we met in Zurich. Shorter days also helped with time zones, even though our two participants from Brazil still had to get up 4:30 in the morning each time we gathered for our morning meeting!

To kick of the school, Anja Pawelleck facilitated  a «Skills Identification session» by marked the beginning. Participants were asked to briefly present their research, while others gave feedback on aspects such as the creativity or innovation of the research topic, the research processes’ structure or how understandably and persuasively participants had presented their work. The goal of the session was to identify the many skills that participants already have that are useful for citizen science.

University College London’s Geography Professor Muki Haklay outlined in the first keynote presentation «Thinking through Citizen Science» – activities, policies, and frameworks the evolution of Citizen Science since the late 2000s. His keynote offered an insightful overview of the different kinds of actors, perspectives and interests engaged with Citizen Science, and how differences between scientific disciplines and their ontologies, epistemologies and methodologies influence the way Citizen Science operates. Professor Haklay pointed out that there is not a ‹right› level of participation. Rather, a ‹right› level of citizen participation may much more be informed by varying project contexts, approaches and definitions. In a short, interactive exercise, participants had to jot down their own definition of citizen science and how it might impact their field. The variety of answers demonstrated perfectly how a seemingly unified logic plays out differently depending on varying standpoints and boundaries.

Focusing on the potentials Citizen Science bears to produce new knowledge beyond institutions and across power relations, Katja Mayer from the Centre of Social Innovation Vienna and the addressed different practices and formats of ‹openness› in research, and how researchers and other stakeholders can benefit from openness in science. «Open Science in general, and Citizen Science in particular, do not only change the modus operandi of research, they also teach us a lot about science» was one of Katja Mayer’s powerful quotes that prompts us to think: How does research work? What are implicit or hidden dynamics that make research work – or fail outside of the usual academic environments? And what practices and ideas hold together the sometimes sensitive settings created by extensive and meaningful openness?

«Transforming research through public participation» was the motto of the school. And as Katja Mayer and Muki Haklay had stated, each discipline, field, or any set of actors and interests builds the framework within which transformation through varying levels of public participation will take place. This is why we asked the participants to start the Summer School by drafting a guiding question which was supposed to guide people through the two weeks of the school. To this end, we had set up ‹peer groups› of about four people in which they could meet every now and then. The peer groups proved to be conducive to fostering a more intimate exchange in an online setting, and it really showed: The discussions were vivid, controversial, and fruitful, just as the guiding questions participants displayed on our main online Mural (another tool we highly recommend).

Participants were able to choose between a variety of parallel workshops, and jointly attended two plenary workshops. In «Citizen Science Communication», Dr. Susanne Hecker dove into the many facets of communication amongst diverse actors, different expectations, values, communication aims and habits, including media use. Together with the participants, they explored improvisation theatre exercises to get a deeper understanding of the basics of human communication. Towards the end, they could identify possible benefits and challenges of communication and interaction in a Citizen Science project, and conclude some very important insights: Communication channels and means must  be diversified in order to target a diverse audience – and constant re-evaluation is key!

In the first plenary workshop, Pia Viviani and Jenny Casetti talked about their experiences in finding and keeping volunteers. After many theoretical inputs in previous workshops, participants were happy to receive a ready-to-use checklist for keeping Citizen Scientists sustainably motivated. Sometimes, the answers were quite straightforward: Instead of investing a lot of time in establishing new communities, it is more effective and easier to look out for already existing groups and communities and their representative, organized bodies. Generally, what should be clear is that volunteers work with researchers, not for them. And lastly: There needs to be constant communication. Always, and much more than one would think.

In another workshop, the two trainers offered hands-on tips and tools for becoming a better Citizen Science Project manager. In a honest and refreshing manner, Pia Viviani and Jenny Casetti began their workshop by examining past substantial planning errors in their own work, and how they managed to draw instructive conclusion for future projects.

Professor Jaqui Goldin from the University of the Western Cape, South Africa, offered a workshop on SDGs, research integrity and ethics in Citizen Science. Discussions evolved around how the topics are relevant to conducting Citizen Science, how ethical behaviour can be assessed in Citizen Science contexts, and how research integrity can be maintained in the field. As to be expected, these discussions were controversial and did not provide one-size-fits-all remedies. Discussion points were, among others: Should Citizen Scientists be payed? How can the “benefits” of a participatory research projects be defined; what is beneficial to whom? Which benefits have more weight?

Dr. Sibylle Studer’s workshop «Tools & Methods for Co-creation» was another hands-on experience for participants who discovered the manifold tools and methods of the td-net toolbox. It is designed for the transdisciplinary research community aiming to bridge perspectives between science and practice. Dr. Sibylle Studer regularly offers this course in collaboration with the Participatory Science Academy!

In «(Re)presentations», Dr. Silke Voigt-Heucke and Julia Lorenz took a closer look at descriptions of Citizen Science projects. The goal was to find out which interpretive horizons shape the project conceptions: While some see the participation of citizens merely as a means of obtaining data, others emphasize the pervasive character of participation. Participants learned how the right language and visual elements in promotional content, websites and other communication means can foster inclusiveness. Concise and clear texts are always a must!

Dr. Daniel Dörler and Dr. Florian Heigl’s workshop was a reflection on what Citizen Science is, or could, or should be. Together with the participants, they explored how Citizen Science can be understood in different contexts and why it is challenging to reach a common understanding of Citizen Science. The aim was to raise awareness of different conceptualizations and characteristics, and of certain areas in research where Citizen Sciences needs further investigations or discussions. However, common criteria are difficult to establish, and it may even be unnecessarily restricting if they are insisted on. Yet, as researchers, we hold considerable power in deciding and negotiating what Citizen Science is and ought to be.

For a taste of different projects and initiatives, we had invited local projects such as CrowdWater, Proof by Underpants and Science Booster. Participants also attended a demo session on the Project Builder, an online tool to set up citizen science projects.

Summer schools (as well as those in winter) are always great opportunities to get to know new people across countries, universities, and cities. But how does that work across computer screens? We organized a range of informal activities to facilitate social interaction. The two weeks offered a perfect timeframe to grow and feed, and bake sourdough. Our colleague Matthias Ammann an expert in fermentation and the like, held a presentation about sourdough and the biology and chemistry behind it. BeerLab, a local bar and brewery in Zurich, sent out parcels with four beers to participants living in Europe and invited everyone for a two hour long beer tasting over Zoom. And on Monday evenings and Friday mornings, participants were asked to stretch their bodies thoroughly in a live yoga session.

On the last day, we held a mini-conference where peer groups presented their guiding question from the first week, the way it had developed, the challenges that occurred and, of course, potential answers. We were fascinated to see how much food of thought everyone processed, the levels of knowledge raised across the board, and the creativity put into the presentations. Have a look at the illustration Carlotta created live during the mini-conference! 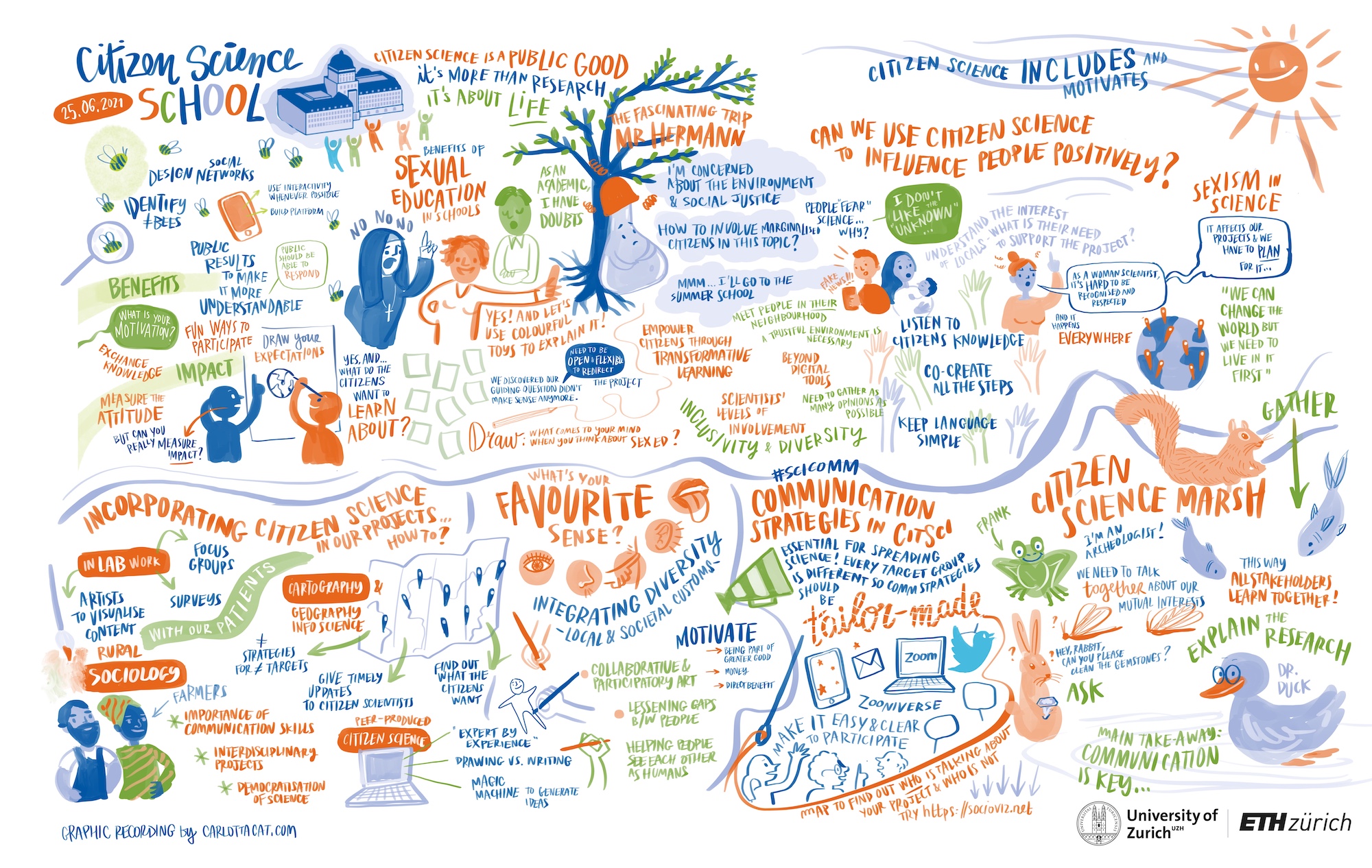 The Mercator Foundation Switzerland made it possible for us to organize the Citizen Science Summer School. We are very grateful for the support and are looking forward to the next Citizen Science School in January 2023!